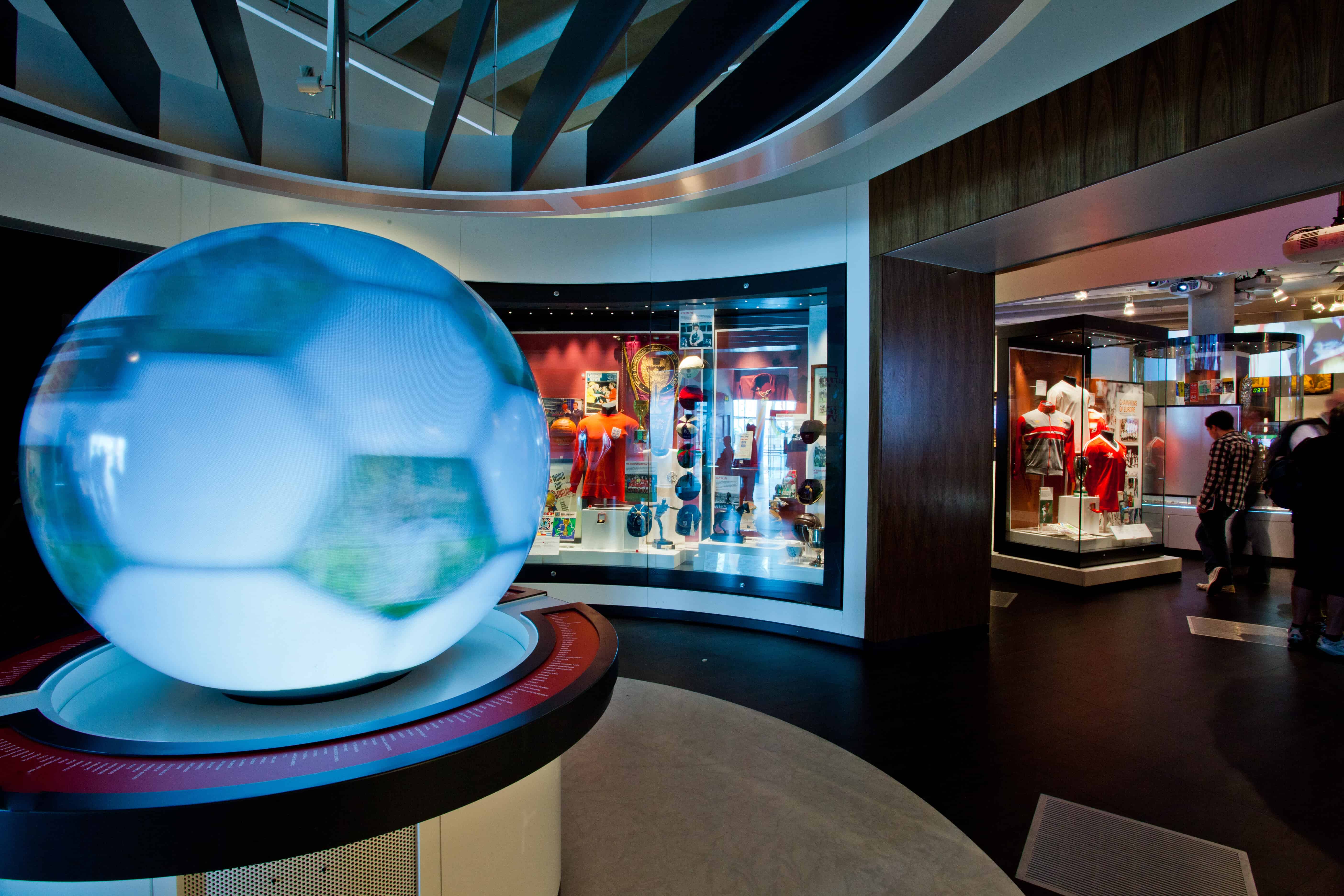 Twelve yards from the Euro 96 goalposts, poised for my penalty shoot-out, I’m torn. Should I go left and low? Right and high? Neither, it seems. Instead, I stumble on the run-up, stub my toe on the ground and watch the ball slowly trickle off sideways. “Sorry, love,” says the attendant, “but I don’t think you’re going to be troubling the leader board!”.

This comes as no surprise to me: ball coordination skills have never been my strong suit. What is unexpected, though, is just how much fun I’m having at the National Football Museum in Manchester. I’m no football fan and had anticipated boredom in the face of football facts and fixtures. Instead, I find that I’m fascinated by displays highlighting interesting social history and entertaining anecdotes, with a generous helping of have-a-go games to boot.

Originally opened at Preston North End’s Deepdale ground in 2001, the museum moved to its shiny new home in central Manchester in July 2012. Quite right, too. This is, after all, arguably the world’s most famous footballing city, a place that has lived and breathed the beautiful game since it was in its infancy. The Football League was formally founded here in 1888, followed by the Professional Footballers’ Association in 1907. Manchester is home to the two richest clubs in the Premier League and inextricably linked to some of the game’s biggest names and most colourful characters. Pick a local, any local, ask for a football anecdote and it’s a fairly safe bet they’ll have tales to tell about Best, Beckham, Balotelli …

The world’s most legendary players are represented in the museum, from all-round heroes (Sir Bobby Charlton is museum president) to small, round villains (Diego Maradona’s shirt from the 1986 ‘Hand of God’ game is on display). But this isn’t just a gallery of fleet-footed all-stars; it’s a place that stirs emotions, too. There’s pride (the 1966 Jules Rimet World Cup trophy) and poignancy (a programme from Man United’s first match after the Munich air crash, with their team sheet left blank because so many players had been killed or injured that no one knew who’d be playing). There’s nostalgia (vintage arcade games), humour (lift’n’sniff dressing room seats that release the aromas of soap, Old Spice and half-time oranges), and even art (including a Picasso ceramic and LS Lowry painting).

And, as it turns out, plenty more scope for humiliation. In a goal-keeping reactions test I frantically slap virtual footballs as they flash up at random on the wall, notching up 38 saves. “The average is about 30,” says guide Alan. Pause. “Then again, you had it set to Easy…”

Suzanne King is travel writer based in the North-West who contributes regularly to a range of magazines, newspapers and websites, including Telegraph Travel and John Lewis Edition.