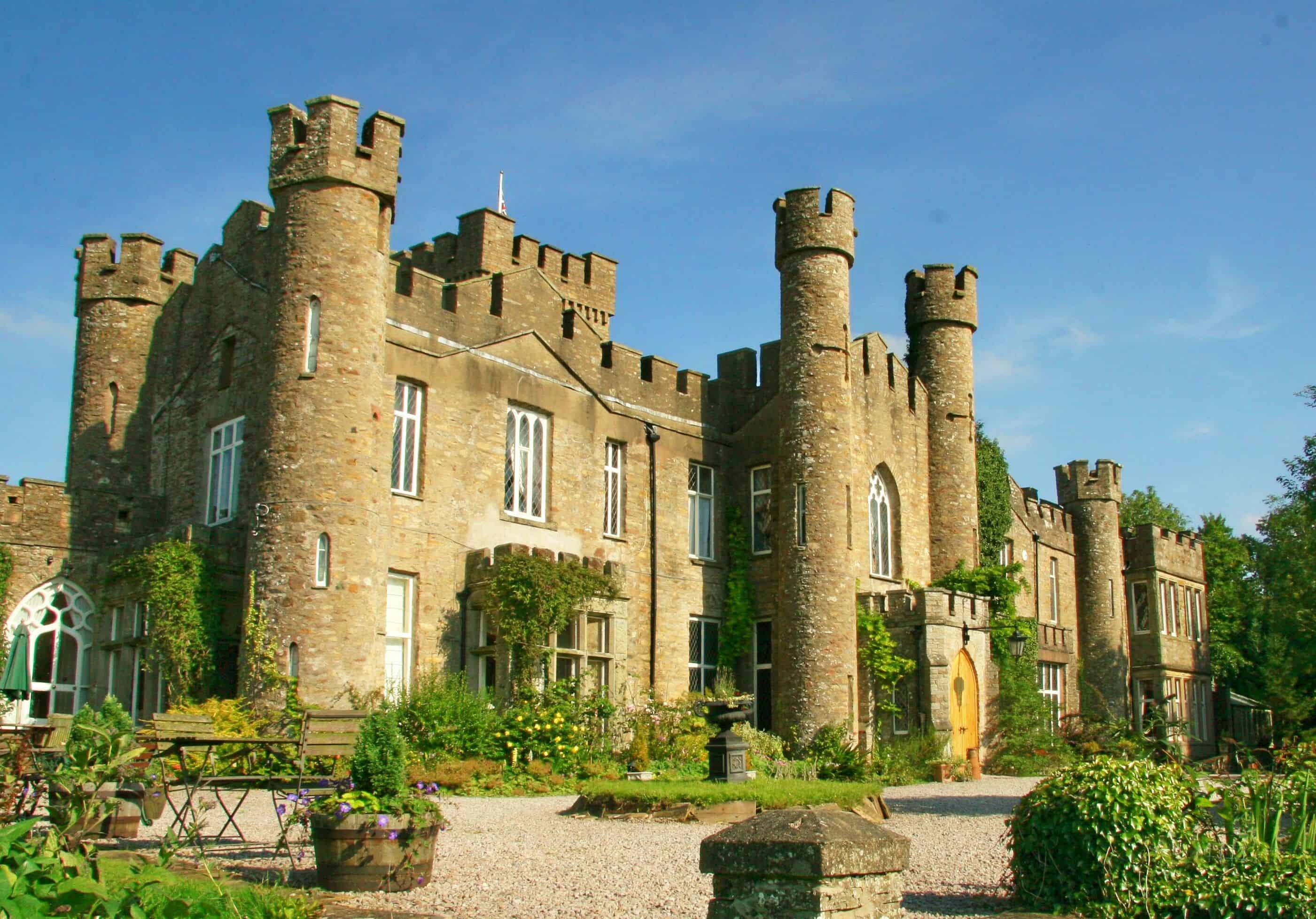 Shooters – A Guest Blog by Simon Bennett of Augill Castle

What happens when the Shooting Party from Hell arrives at Augill Castle feeling very chuffed with themselves?  Find out as part of our ongoing series from Simon Bennett’s acclaimed book of stories from the hospitality trade.

In 1997 Simon & Wendy Bennett moved out of London and bought a near derelict castle at the foot of the Cumbrian fells. Today Augill Castle is a country house hotel with an international reputation but that was never really the plan. In his book, Undressed For Dinner, Simon recounts the story of fifteen years of hard graft building a hotel business from scratch while bringing up a family in a very fast changing world. Throughout he asks, how did we get here?

Shooters are an individual bunch.

One particular couple haven’t been recommended but found us sometime ago when we were much smaller and cheaper. And they seem surprised that anything has changed.

The shooting party is going on up the valley and we’ve picked up the overspill who presumably aren’t quite good enough to stay with our beastly near neighbours, the Blanchard-Caffertys. Apparently our guests came to the charity Ball we were duped into hosting for the B-Cs a few years ago.

There’s something about shooters and shooting parties that I just don’t get. Maybe you’ve got to be part of the set which, since my antics with a shotgun a couple of years ago, I am definitely not (I suspect word has got round).

For one thing, in these days of modern, high tech outdoor clothing, Goretex and the like, to which a whole retail industry is devoted, what on earth is anyone doing tramping across wet, windswept moors in heavy cotton drill plus-fours tucked into woollen socks above a pair of polished brogues wearing a tweed jacket and flat cap?

Not only do they look ridiculous but it is totally impractical. If it’s raining they must come back at the end of the day weighing twice what they did at the start.

In the village is a tailor’s shop dedicated to kitting out shooters and gamekeepers in just this sort of attire and incredibly people come back year after year for a re-fit.

Champions of the sport will argue that it’s all in the name of tradition but tradition can move with the times and adapting one’s attire doesn’t mean the demise of the shoot.

More people climb Mount Everest every year but they sure as hell aren’t wearing the same garb and using the same equipment as Edmund Hillary and Sherpa Tensing did in 1952.

But if the uniform of shooting gets me riled it is nothing compared to the attitude and pomposity that can go with it.

As a black Mercedes pulls up outside one murky early autumn afternoon I’m quickly at the door as it’s pouring with rain. Out get two decidedly tweedy types and the car really doesn’t fit the image.

‘We’ve hired the car,’ I’m quickly told by way of an apology, ‘one simply doesn’t need one full time in Kensington.’

‘Right-ho! I’m Simon,’ and being September I proffer a well worn, season-weary hand and smile.

‘Quentin Farquhar-Smythe, delighted,’ and I get the impression he thinks it’s me who should be delighted. ‘And this is Chla…’

The lady is of some central European extraction and I just don’t catch her name. It sounds like Chlamydia but surely it isn’t. Unfortunately I am not given a chance for a second enquiry.

‘Do come in out of the rain,’ and I gesture them into the hall.

Chlamydia is wearing a fitted tweed jacket, white jeans, high heeled, highly polished shoes and is sporting a small Harrods carrier bag on her wrist by way of a handbag. She spies me eyeing up the bag.

A Fortnum & Mason bag would have been classier, I think.

‘Do call us Quen and Clam,’ I am invited.

Oh must I? And I resist making an offer for them to call me Si. ‘Let me show you round.’

‘We’ve been before, to the B-C Ball,’ Quentin tells me. I expect you do jolly well from Martin and Clarissa’s overflow?’

A mental image forming of Martin & Clarissa’s overflow I quickly put out of my head. ‘Um, well I don’t think we’re top of their list of recommendations,’ I counter.

‘Oh yes, they say they’re terribly good friends of yours.’

‘You’ve done it up in here,’ he says, as we enter the Music Room, unintentionally changing the subject which is a shame as I am keen to know more about our apparently inseparable friendship with the B-Cs.

‘Well done,’ he says, stroking the sofas appreciatively, ‘I seem to remember it was all looking a bit shabbers before.’

Quentin is carrying a shotgun over his shoulder and I offer to lock it away in the safe.

‘Going to shoot the guts out of a few dozen baarrds,’ he exclaims in a sort of gutteral, rather overfed, over-stuffed with self-importance sort of way.

‘Excuse me?’ I didn’t quite catch that.

‘Oh, birds.’ I feel like shooting the bollocks off a guest or two right now but I think better of telling him so.

With the gun safely stowed I take Q & C to their room, a garden suite.

‘Bit inconvenient having the door from outside opening into the bedroom,’ he observes.

‘Is it? Where would you have us put the door?’ I ask politely through gritted teeth.

He doesn’t answer but shouts at nobody in particular ‘Lights?’

‘Um yes, on the ceiling,’ I am perplexed by both the question and why he should be shouting.

‘With the switches, usual sort of arrangement,’ but he’s not listening and is rattling a door in the bathroom.

‘No, that’s a store cupboard the lavatory is behind you.’

‘Jolly good. Need a good turnout after all that driving.’

‘See you for drinkies then, got the Blanchard-Caffertys coming at about seven fifteen.’

‘OK, are they staying for dinner?’ I ask.

The Blanchard-Caffertys arrive customarily late for drinks. It’s actually not Martin and Clarissa, but Martin’s brother Jeremy (Jezza to his intimates) and his ghastly wife Julia. The whole family is late for everything, something to do with their ill-disguised contempt for anyone who doesn’t have a share of their genes – which is pretty much everyone since, for generations they have been very wary of sharing genes outside the immediate family.

Their contempt for us is further compounded by the fact that we work for a living in something as tawdry as hospitality.

‘They’re just trade,’ one of the B-Cs was once overheard as saying, conveniently oblivious to the fact that what is left of their family fortune is founded on black slavery.

Well I don’t like to harp on about it, but our house is still bigger than theirs and they know it. And it’s not falling down.

Needless to say the Blanchard-Caffertys fail to acknowledge either Wendy or myself as anything other than staff so Wendy takes the initiative by grabbing Julia’s hand in a hearty handshake. ‘How lovely to see you, are you well?’

‘Ignorant bitch,’ says Wendy as she returns to the kitchen.

Dinner is almost ready and both of us, in chef jackets, go into the Library to see our guests.

Chlamydia is clapping with delight, ‘You’re not the chefs?’ she squeals.

‘Well unless we’re dressed like this to extract your teeth I think we probably are,’ I reply.

‘Oh you’re soo clevvaar. How priceless, what a wheeze.’  The whole experience is clearly way outside her comfort zone, having never encountered Heston Blumenthal or Gordon Ramsay anywhere near their own restaurants, let alone mingling with the guests, and she just becomes shriller and shriller.

Wendy turns to me, ‘I don’t know about wheezing, but I’m gasping for a drink,’ and we retreat to the relative sanity of the kitchen.

Dinner goes well. Quentin gets ridiculously drunk and regales the table with tales of his happy days at prep school with one or other of the Blanchard-Cafferty brothers. ‘Got buggered senseless by the prefects, didn’t do me any harm.’ If there’s some debate about that, nobody’s about to start it here.

Find out more about Augill Castle at stayinacastle.com. Buy a copy of Undressed For Dinner at www.hayloft.eu.

Simon was born in North London and moved with his family to Somerset aged three. He attended Taunton School where hid did enough to get by and studied at Bournemouth University where the beach was always more tempting than the library.

After graduating with a BSc in Food and Catering Management he worked in various capacities in hotels in the Channel Islands, London, Sydney & Perth, Western Australia.
On his return to England he took a post graduate diploma in journalism and worked as a reporter on evening newspapers in the East Midlands for two years before marrying Wendy, buying a share of a restaurant in London’s Mayfair and moving to West London, all in the space of a month.

In 1997 the couple put everything on the line to buy a crumbling wreck which they have turned into a hotel which today they still resolutely refuse to run in any sort of conventional way.

He is a director of Cumbria Tourism, a governor at two schools and a dedicated supporter of Penrith RUFC under 16s.