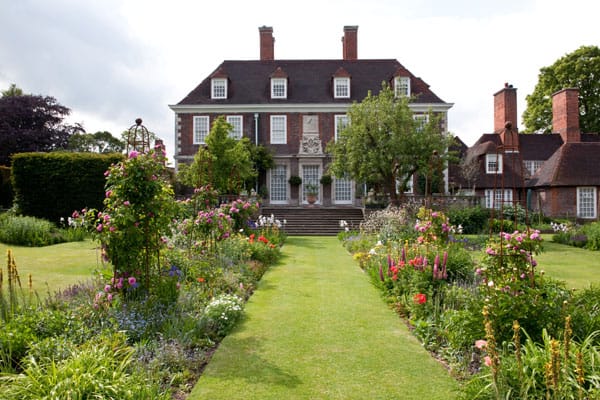 The Secret is Out: The Stunning Secret Gardens at The Salutation, Sandwich

In the long history of teamwork there are certain great symbiotic partnerships which spring to mind – Gilbert and Sullivan, Astaire and Rogers, Morcambe and Wise…a list to which many would gladly add the names of Lutyens and Jekyll. Sir Edwin Lutyens is by common consent one of the finest English architects and the grandeur of his buildings were perfectly complemented by the gardens designed by Gertrude Jekyll.

The Salutation in Sandwich is an exquisite example of Lutyen’s country house style and it’s one of the few properties where he not only designed the house but also laid out the gardens (though with Jekyll’s influence clear throughout). Built in 1912 for three bachelor brothers, in 1950 The Salutation (named after a pub formerly on the site) became the first 20th century building to be listed as a Grade I property.  Fate dealt the building a bad hand in the second half on the 20th century and after a chequered history of years of neglect, a serious restoration has finally brought both house and gardens back to their prime.

A stroll through the famous Secret Gardens is a treat any time of year, but they look particularly fetching in spring. Over 100,000 bulbs of 200 different varieties have been planted in the garden over the last eight years and usually provide a riot of colour from March until the end of May.  In June the alias and Calla lilies come to the fore, followed by dahlias and asters in the late summer/early autumn.

The gardens are open to visitors seven days a week throughout the year, but it’s even more special to stay the night and enjoy the grounds at your leisure. The Salutation has been called by the Financial Times “Britain’s smartest Bed and Breakfast” and we understand why. The rooms are divided across the elegant main house and three charming cottages on the grounds. Your charming hosts are Dominic and Stephanie Parker, who made memorable recent appearances on Channel 4’s “Four in a Bed” and “Gogglebox” and will be returning for the second season of Gogglebox beginning on Wednesday, 25 September at 10pm.

For those interested in a day trip, entry to the Secret Garden from March to November is £6 per adult, £3 for children under 16, free for children under 3. Senior discounts, family tickets, season tickets and group rates are available – enquire for more information.  In December and January entrance is free and prices are 2 for 1 in February.

Very informative guided tours are also available for groups when booked in advance.