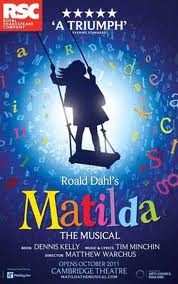 When asked whether or not I like musicals, I’m immediately faced with a conundrum. If I answer “yes,” then my interlocutor more often than not automatically assumes that I must be enamoured of every over-produced, under-written, “celeb”-laden corporate jukebox monstrosity currently clogging the arteries of the West End. If ruefully I shake my head “no”, how then to explain those (mis)spent hours over the course of my youth when I devoured hundreds of original cast albums, not to mention that even now I have near-perfect recall of virtually every lyric Cole Porter and Stephen Sondheim ever wrote?

So, in all honesty, yes I love musical theatre, but it’s been a really long time since I’ve seen a new musical to which I can award my full approbation. Does the RSC’s current production of “Matilda The Musical” end that long dry spell? Well, yes and no, but mostly yes.
Never having read the story by Roald Dahl (and having had only a little exposure to the work of Tim Minchin), I came to the theatre with my tabula set firmly to rasa. The first number, “Miracle”, charmed me completely. Not only is this a very economical piece of exposition, the song chimes effectively with my own satirical feelings about today’s over-coddled, over-praised, over-confident young. Further excellent numbers follow, including the beautifully well-staged and moving early second act “When I Grow Up”, and every number served up by Bertie Carvel as the truly unnerving Miss Trunchbull is worth the price of admission alone. The lyrics by Tim Minchin were brilliantly clever and

playful when I could make them out, but sometimes I struggled to understand them when sung by the enthusiastic but cotton-mouthed younger members of the troupe. Minchin’s music was a bit more hit-and-miss for me, with high points being very high, but low points sometimes falling into paint-by-numbers pastiche. The book by Dennis Kelley keeps the action whipping along at a fast pace, but transitions seemed a bit too emotionally cartoonish at times and I admit my attention sometimes wandered while anticipating the next appearance of the dread Miss Trunchbull.

My occasional reservations were emphatically not shared by most other audience members around me; in fact, one of the great joys of the piece was to watch to rapt expressions of the girls and boys (of all ages) as they watched Matilda’s story unfold. All was effectively staged by acclaimed Matthew Warchus, who was aided by very fine set design and lighting. All in all, this is a very promising musical theatre debut from Mr. Minchin; I wish him all possible luck in revitalising a moribund genre. While “Matilda the Musical” isn’t perhaps the unqualified masterpiece suggested by some of its more over-enthusiastic reviewers, it’s a solid piece of work and very much worth supporting as one of the finest British musicals of the 21st century (an admittedly not overcrowded field).

To book tickets to “Matilda the Musical”, click here.