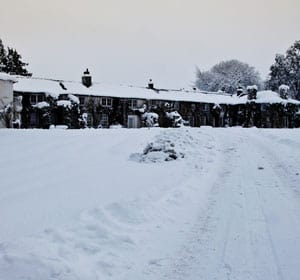 Well I think most folk in Ireland will agree that Christmas 2010 will not be forgotten for a while to come. Temperatures got as low as -16 & -19 in some parts! A White Christmas indeed! This Arctic weather spell was in the lead up to Christmas and bookings were made and events planned. Some went ahead and others just had to be postponed or cancelled altogether. Spending Christmas at a Country House or Hotel is a big deal for people, many guests return to the same property year after year and others will try something new each time. Many regular guests of particular properties will reserve the same room or suite year after year!

At Rathsallagh House they were covered with a beautiful deep blanket of white snow and December 24th loomed – Check-in day for all their Christmas Guests. They had taken 14 cancellations in all – Joe and his team were disheartened and had to think outside the box. Being located on a 530 acre estate there are Land Rovers on hand to take guests from the Golf Clubhouse & Golf Course to and from the Country House and retrieve produce from their Walled Gardens.

Joe and the team at Rathsallagh were staring at a quieter that normal Christmas with fewer guests now being able to make it to Dunlavin; BUT they thought, if our guests cannot make it to Rathsallagh House WE SHOULD GO GET THEM AND BRING THEM HERE! The show must go on.

Each cancelled guest was contacted and the idea put to them; the majority were Dublin based and this was warmly received by the guests and a sense of excitement grew for the staff and the guests alike. A route had to be planned back from Dublin as the majority of roads were snarled up; so Guests were chauffeured to Rathsallagh House through mountain roads by Land Rovers, Snow Chains and Brave Drivers! It was a journey to remember.

Once they were all safely at the Country House the Christmas programme could get off to a roaring start with hot Mulled wine and Champagne. Happy warm memories were made and a superb Christmas was enjoyed. Upon check out, guests were reserving their rooms again for 2011!!

In the weeks before Christmas a fantastic wedding took place; the bride and groom had to be taken to their ceremony by Land Rover too! It would be safe to say that Rathsallagh House have customers for life and are thrilled to see their GREEN pastures once again.

Follow these links for more information on Rathsallagh and available special offers. Check also our selection of Christmas breaks in UK and Ireland.