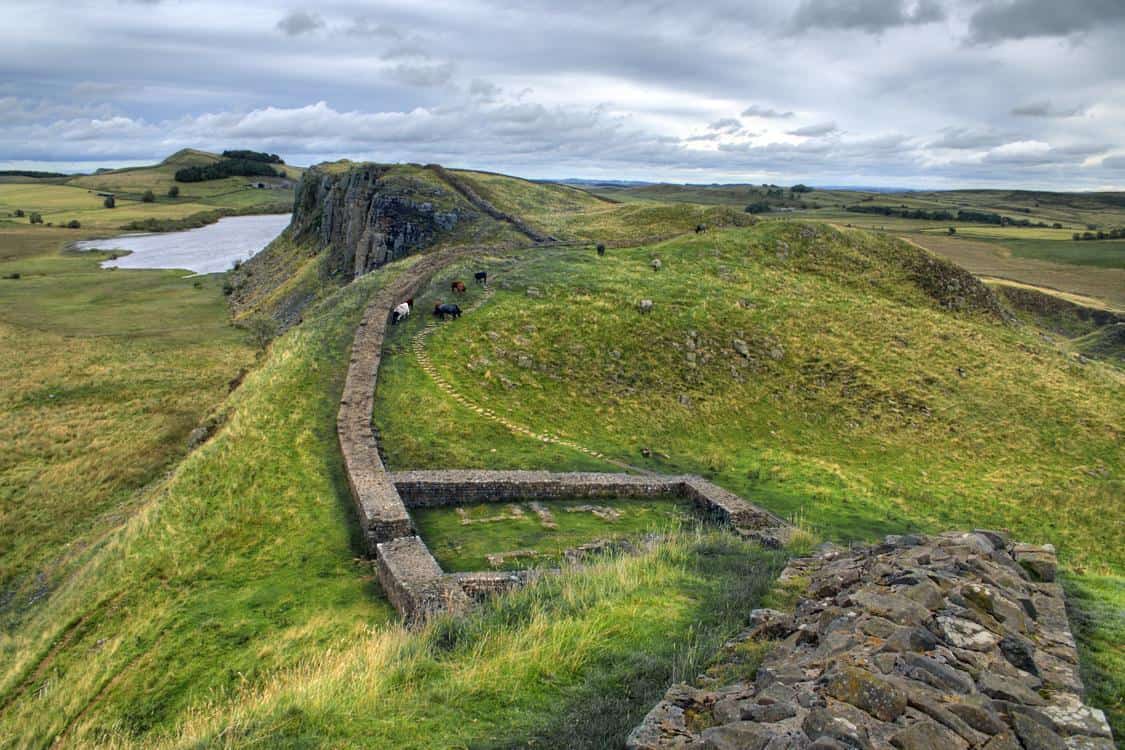 Summer is the perfect time to explore the natural, beautiful countryside of Britain on foot. There are hundreds of miles of trails with views that will leave you breathless.

In this blog, we will discover the Hadrian’s Wall National Trail and the history behind it.

The path along Hadrian’s Wall stretches from coast to coast and is one of the few rare remaining monuments from the times of the Roman Empire in Britain, which ended about 1,600 years ago. The wall was a defensive fortification that was begun by the emperor Hadrian in AD 122. Much of the wall is still intact, and there are many other bits of Roman history and ruins to see along the way. Hadrian’s wall is one of the most popular and most visited UNESCO World Heritage site in England.

Although the wall is 84 miles long, you don’t have to walk the whole thing. Unless you want to, of course! It would take an experienced walker about six days to walk the entire length, so if you have a week to spare, challenge accepted. The walk is not entirely rural, so don’t worry. There are plenty of pubs along the way if you fancy a well-deserved drink.
For those that only have a short time to explore the history and wonder of Hadrian’s trail, there are plenty of trails and walks catered to your ability and the sites you want to explore. Here are some of the must-see places along Hadrian’s Wall:

1. Housestead’s Roman Fort – 800 Roman soldiers were stationed along the wall in this fort which includes a massive Commandant’s house. Starting 19 July, there will be an exhibition called ‘A Soldier’s Life’ on the weekends featuring a real-life Roman soldier who explains how the fort was built and the impact it had on the empire as a whole.

2. Temple of Mithras – This temple, which was named after Mithras, an Eastern God, was constructed in the 3rd century. Roman soldiers were fascinated with this God, which is why the temple was named after him. The temple was desecrated, probably by Christians, but some of it still remains intact and in good condition.

3. Sycamore Gap – If there’s any Robin Hood: Prince of Thieves fans reading this, then you will definitely recognise this photo. It’s just a short walk from Housestead’s Fort, and the route is very scenic and offers many panoramic views.

Hadrian’s Wall may have once housed the Romans that lived during that time, but in their current state, they’re certainly not suitable to accommodate the modern day human. Best Loved Hotels Augill’s Castle is less than two hours away from Hadrian’s Wall and you will feel like a Roman emperor in this elaborate castle. The decorations are elegant and Victorian, but inviting and homey. The Egyptian Cotton sheets will feel like heaven after a long fun-filled day of exploring Hadrian’s Wall. The atmosphere is relaxed, the scenery is amazing and dinner is served at a large oak table with all guests welcome to attend. If it’s luxury and relaxation you’re looking for, than Augill’s Castle is the ideal place.

Augill’s Castle is located off the beaten path, which makes it all the more special. Don’t worry about food or drink though, there is a bar and delicious homemade food offered daily. Local ingredients are used in the preparation of the meals, and BBQs occur regularly on the expansive lawn during the summer months. Visit soon for an unforgettable experience!