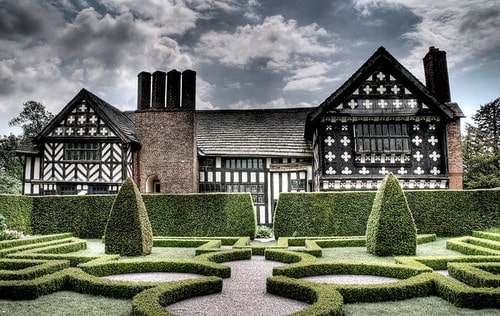 The British Landscape is rich with ancient and majestic houses, hidden away in the nooks of cities and in the depths of the countryside. Britain’s Historical Houses therefore explores these houses and brings their stories to you, our readers.

Here we will be exploring Little Moreton Hall, Cheshire.

Little Moreton Hall is one of Britain’s most splendid manor houses and is an English National Heritage site. The construction began in the early 1500s by the prominent Cheshire landowner William Moreton, but didn’t end for another century in 1610. While the house was constructed during the Tudor Era, Little Moreton Hall is medieval in design and resembles something straight from a fairy tale.
The house is most famous for its intricate black and white timbering design. The architecture of the house was very unusual for that time, and incorporates an abundance of glass windows – something that was used mostly just for churches in the 16th and 17th centuries. Little Moreton Hall is situated on a small island connected to the grounds by a small moat. The moat is older than the manor and was probably used to protect a previous building on the grounds.

Visitors are welcome at Little Moreton Hall from June to December. The hedges in the garden are finely clipped in a Tudor design and a great place for a mid-afternoon stroll. Guided tours are free and you can get a full history of the Moreton family and what it was like to live in the Tudor times.

While no one can stay overnight in the castle these days, Best Loved has the ideal base nearby:  charming and fashionable Oddfellows in Chester is under an hour’s drive from Little Moreton Hall. The Garden by Simon Radley is a wonderful place to dine and guests can enjoy a relaxing meal by the fire, or thanks to a large canopy, can dine outside rain or shine. All of the rooms contain Nespresso coffee to make a nice latte to start the day off with. If you are looking for a modern, sophisticated lodging, look no further.

Little Moreton Hall image by Sentimental Garden. Bay window image, image of the manor’s moat and the hedge gardens are by David Ross.