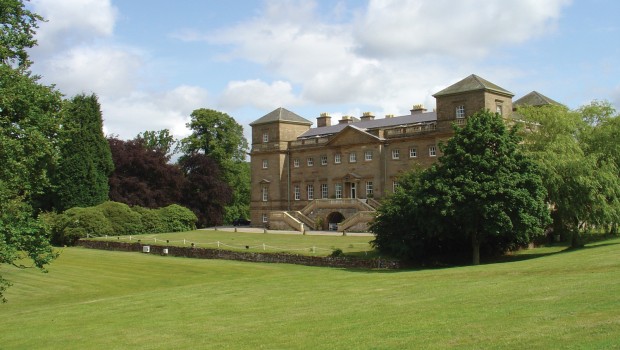 We’ve got a new blog series underway. The British Landscape is rich with ancient and majestic houses, hidden away in the nooks of cities and in the depths of the countryside. Britain’s Historical Houses therefore explores these houses and brings their stories to you, our readers.

In this blog, we will be exploring Hagley Hall, West Midlands.

Hagley Hall, West Midlands, created by George, 1st Lord Lyttelton in 1760, sits amongst the rolling hillside just outside of Birmingham. The house boasts one of the oldest deer parks in Britain and is regarded by some as one of the finest landscape gardens in the country. Created in the 18th century, the park has an astounding heritage which you can explore as you wander through the twisting woods and breathe the fresh air alongside the many deer in the luscious meadows surrounding the Hall.

The grounds itself, other than being a gorgeous, deer-filled place to visit, has a somewhat unusual history. Prior to the Hall being completed (some 50 years prior, actually), Stephen Littleton and Robert Wintour, who had been part of a plot to assassinate King James I of England and VI of Scotland, were found on site and arrested! The site is also the source of a spooky Lyttleton ghost story and a raging fire in which the Hall was almost lost (causing subsequent refurbishment).

Tours around the house are great to enthral the minds of young kids as your guide recounts tales from the hall’s history. Some tours end with a light afternoon tea in the Tea Room.

Don’t miss out on this opportunity to explore one of the gems of Britain.

For more information about Hagley Hall, and to book your tour, click here.

Want to accompany your trip to this great Historical House by staying in a great Historical House? Stay at our stunning Victorian hall, The Wood Norton based in Evesham, Worcestershire. This space has recently undergone a multi-million pound refurbishment and features luxuriously furnished and decorated rooms, an elegant restaurant, a chic bar and a delightful snooker room. The Wood Norton is only a forty minute drive away from the Hall and its history.