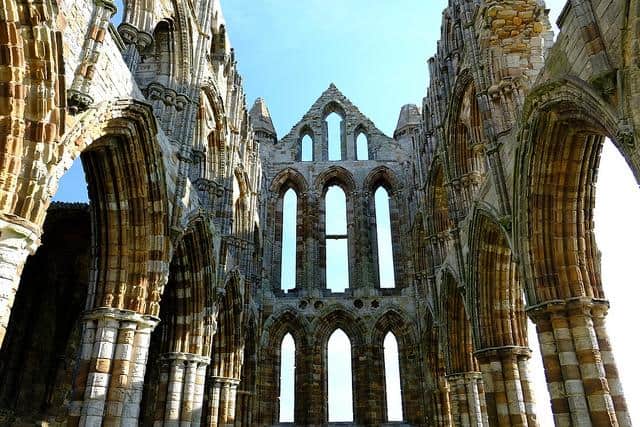 This week’s blog will tell you about Whitby Abbey, one of the most ancient and historical churches in Britain. (This blog could very well fit into our blog series Britain’s Best Views, as well, as it is one of the most spectacular sights of Northern England.)

Although Whitby Abbey was destroyed during Henry Vlll’s reign, and withstood even more damage in the WWl by German battlecruisers, the ruins are still standing and visited by thousands every year. Many British folklore and legends are derived from Whitby Abbey and still believed today.

Whitby Abbey was built in 657 AD as a monastery, where it was first named Streonshalh, and St. Hild was appointed the founding abbess. St. Hild is best known as converting England to a Christian country as the Synod of Whitby took place during the time she was at Whitby Abbey. The Synod of Whitby occurred in 664 AD where a vote was held to decide whether the church would celebrate Easter on the Celtic or Roman date. The church voted for a Roman date, and this began the decline of Celtic Christianity.

It is said that the ghost of St. Hild can be seen between 10 and 11 when the sun shines on a high window of the ruins. Her phantom is also said to walk around the desolate church at night.

For two centuries, Whitby Abbey was an important and influential part of the Christian religion until it was invaded by the Vikings in 867 AD in a bloody and violent attack. In the late 11th century, Whitby Abbey was rebuilt into a prominent monastery until Henry Vlll’s Dissolution of the Monasteries in the 1500s.

Whitby Abbey is most known for the inspiration of Dracula, one of the most famous Gothic horror novels ever written. In the novel, Whitby Abbey is the destination of the ship that carries Dracula from Transylvania to England.

After you watch the sun set over the beautiful ruins of Whitby Abbey, why not stay at the Black Swan Hotel in Helmsley, North Yorkshire? It’s just an hour drive away through the lovely countryside. The Black Swan has plenty of history itself, as it has been an inn for over 500 years. Helmsley is a small picturesque town that has plenty to explore if you find yourself in the area for a while. The Gallery is an award winning restaurant in the hotel that cooks with local Yorkshire ingredients, so be sure to stop by for dinner!