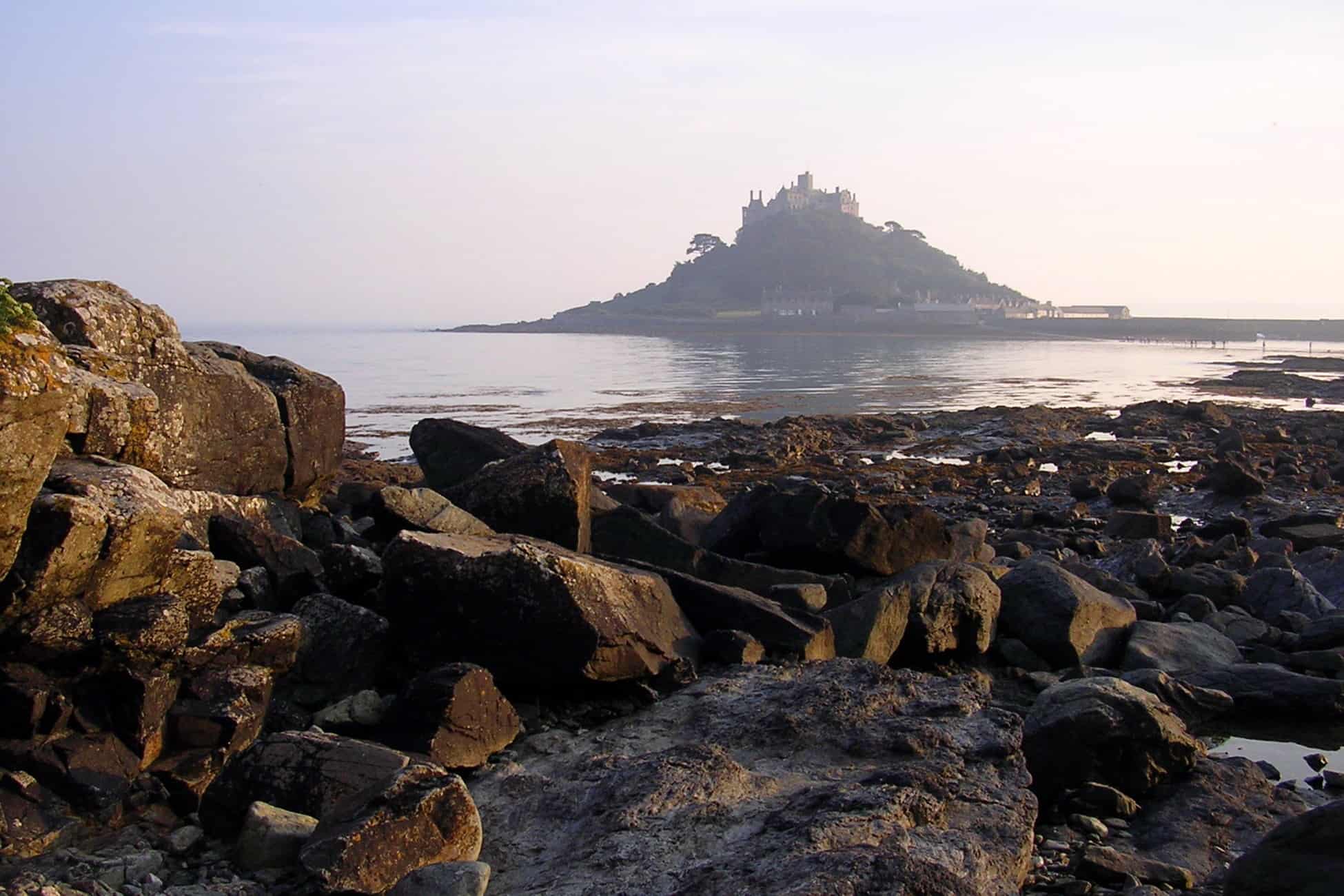 Explore the amazing tidal island world and delve into the history of St Michael’s Mount.

St. Michael’s Mount is one of the most remarkable places to visit in Cornwall and also the jewel in Cornwall’s crown. Besides the beautiful location and stunning views, you will be able to catch up on thousands years of incredible history and trace footsteps from the past. A great day out during your stay in Cornwall!

This National Trust location is the perfect getaway, complete with history, myth, legend and intrigue. Stroll across the causeway, following the footsteps of pilgrims, or hop on an island boat trip. At this magical place you can tour a medieval castle, bask in a sub-tropical paradise, discover a close-knit island community and a learn about mysterious story about a giant. We told you there was intrigue! More on that below…

The Mount’s medieval castle dates back to the 14th Century and the Mount is believed to have been an important port of the Iron Age. Even further back than that, it is generally believed that the St Michael’s Mount was the island of ‘Ictis’ where the Greeks traded for Cornish tin. Its location makes the Mount an ideal fortress and was used by the military in 1646 during the English Civil War. The Mount was bought in 1660 by Sir John St Aubyn, and since then, it has become a peaceful property.

A trip to Michael’s Mount is also the perfect getaway for a family outing. You could join a tour around the castle or plan your visit to the beautiful gardens. For lunch or at the end of the day you could enjoy some fresh local food in the Island Café or the Sail Loft Restaurant. And who doesn’t enjoy souvenirs? You can buy some at the Island and Courtyard shops.

If you have young ones, the Mount will provide them with fascinating history, legends and myths surrounding St Michael’s Mount such as the one about the legendary giant and his heart which it is said can be found on one of the pathways up to the castle! The castle and the gardens will also provide hours of exploration fun for your kids. They could join in on several treasure hunts and games to discover the unique nature of some of the plants of the sub-tropical gardens as well as historical facts from back in the days.

We recommend that you climb to the island’s summit where the vision of Archangel St Michael reportedly appeared to some fishermen in the year 495.

St Michael’s Mount is located some 3 miles east of Penzance. While getting access to the island is easy at low tide when the causeway is opened for pedestrian crossings, there are ferry boat services running at high tide during the summer. The Mount’s castle and gardens are open to the public during weekdays from April to October, and most weekends.

Trereife House Hotel (pronounced “Treave”) is located only an 11 minute drive from the island – which, incidentally, is the most convenient way to get to the island, though public transport will also take you there within less than 45 minutes. The house has been owned by the Le Grice Family for seven generations and is warm, inviting and filled with interesting, antique artefacts. The exploring will never stop if you stay at Trereife! All rooms come with all modern comforts including Wi-Fi and you will be served breakfast every morning. It’s also a short walk to the beach or into the town if you want to explore something other than the Mount. There is also a self-catering cottage on site available for hire, if you prefer.

Have a great time at the Mount!