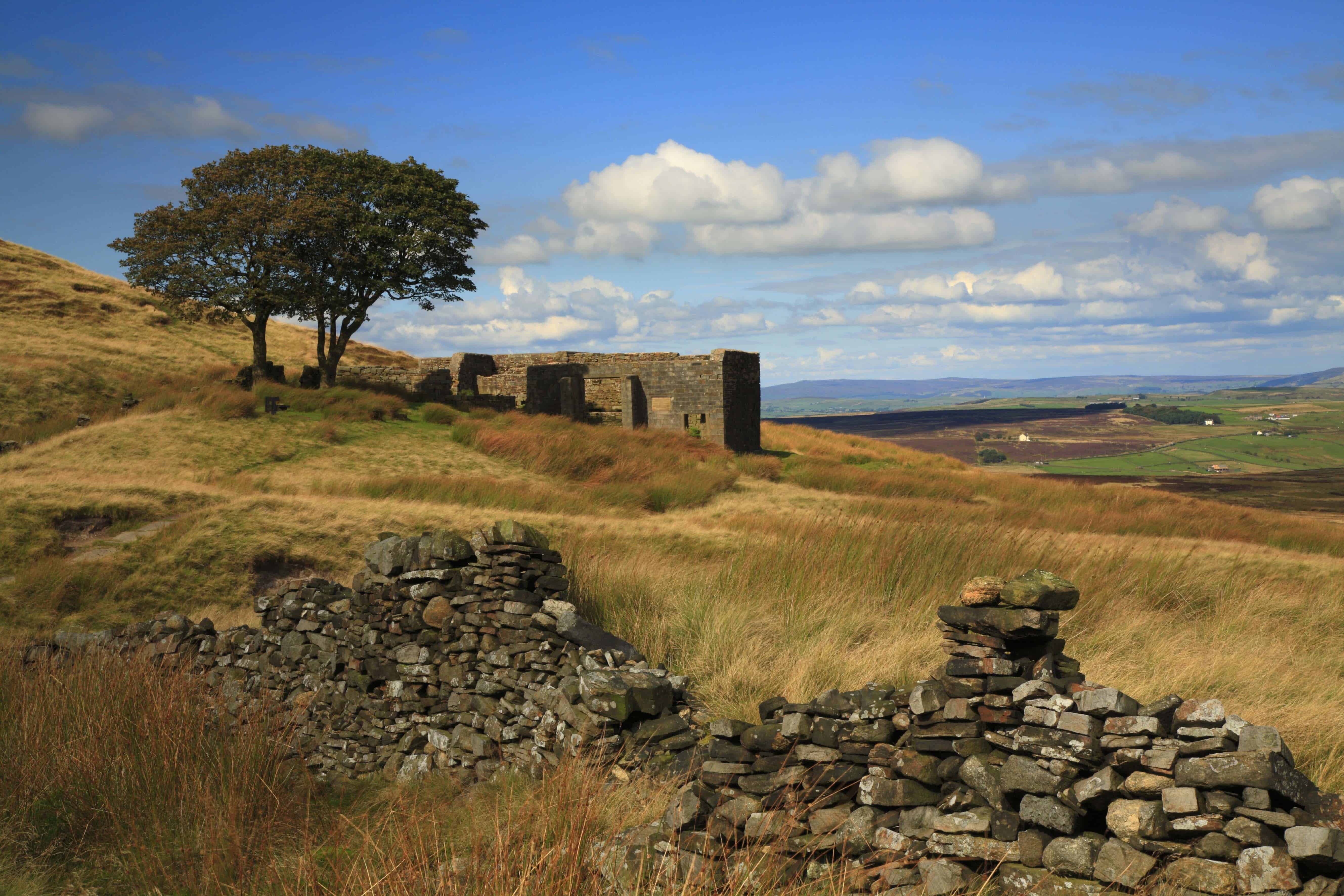 Best Loved Hotels Guide to the North of England

The North of England comprises some glorious scenery, from Dale to Moor, from coastal cliffs to Lakeland Fells, alongside historic cities, impressive stately homes and  picturesque villages. Our guide to the North of England stretches from Cheshire and Yorkshire up to the Lakes and Northumberland – an inexhaustibly rich and fascinating area.

This is by any standards a remarkable dining room. There’s a lot of vivid red of a kind that early Victorian dyes made possible – it’s in the curtains and the carpet and even the wallpaper. From Charlotte Brontë’s letters, we know that these drapes are exact reproductions of those she ordered for the Haworth Parsonage ​in 1850. There’s also a big fold-out table open in the middle of the room. “That’s where the sisters would walk round the table discussing their books,” says the custodian proudly. Charlotte, Emily and Anne Brontë did most of their writing in this room. Jane Eyre, Wuthering Heights, and Agnes Grey were probably handwritten at that very table and every evening, until their father called them to bed, the three young women would pace round the table discussing their fiction.  There’s even the chaise on which the stubborn Emily Brontë is said to have died in 1848.

Originally opened at Preston North End’s Deepdale ground in 2001, the museum moved to its shiny new home in central Manchester in July 2012. Quite right, too. This is, after all, arguably the world’s most famous footballing city, a place that has lived and breathed the beautiful game since it was in its infancy. The Football League was formally founded here in 1888, followed by the Professional Footballers’ Association in 1907. Manchester is home to the two richest clubs in the Premier League and inextricably linked to some of the game’s biggest names and most colourful characters. The world’s most legendary players are represented in the museum, from all-round heroes (Sir Bobby Charlton is museum president) to small, round villains (Diego Maradona’s shirt from the 1986 ‘Hand of God’ game is on display). But this isn’t just a gallery of fleet-footed all-stars; it’s a place that stirs emotions, too. There’s pride (the 1966 Jules Rimet World Cup trophy) and poignancy (a programme from Man United’s first match after the Munich air crash, with their team sheet left blank because so many players had been killed or injured that no one knew who’d be playing). There’s nostalgia (vintage arcade games), humour (lift’n’sniff dressing room seats that release the aromas of soap, Old Spice and half-time oranges), and even art (including a Picasso ceramic and LS Lowry painting).

A Best Loved hotel nearby – Hotel Gotham is an ultra-stylish & luxurious new hotel in mid-town Manchester. Opulent, retro decor and access to the rooftop private members club. Within easy walking distance of much of Manchester’s best shopping and an 8 minute stroll from the National Football Museum.

Fountains Abbey is the largest and best-preserved Cistercian monastery in the country, as well as one of the National Trust’s North Yorkshire treasures. It dates back to 1132 and became one of the richest abbeys in the land before Henry VIII began his campaign to dissolve the monasteries some 400 years later.  The magnificence is evoked by the  vast crumbling walls, cloistered archways, hidden passageways and 49 metre-high bell tower. The 800-acre plot also contains not only the Abbey but also a Jacobean mansion, a Victorian church, a deer park, and 18th-Century landscaped gardens packed with ornamental lakes, canals and follies.

A Best Loved hotel nearby – The Old Coach House is a fabulous hidden gem of a B&B near the Yorkshire Dales and the Yorkshire Moors. Combines authentic period charm with contemporary luxury and a relaxed atmosphere. 7 miles from Fountains Abbey.

Castle Howard is home to the Howard family for more than 300 years. The was the first architectural project gentleman/dilittante/playwrigtht Sir John Vanbrugh, and the result is one of the jewels of the English Baroque. In addition to its most famous appearance in Brideshead Revisited, Castle Howard has served as the backdrop to a host of film and TV adaptations.

A Best Loved hotel nearby –  The Talbot Hotel is a Grade II listed building in the pretty market town of Malton, proudly known as “Yorkshire’s Food Capital”. Classic British design meets traditional values of comfort and service in this elegant hotel only a 15 minute drive from Castle Howard.

Max the credit card in the shops of the Victoria Quarter and discover why Leeds is known as the ‘London of the North’. Now beautifully restored to its original glory, Victoria Quarter was originally designed by architect Frank Matcham. His rich marbles, gilded mosaics, handsome cast and wrought iron, as well as carved and polished mahogany, create two streets, two arcades and the Empire Theatre (now Harvey Nichols).

A Best Loved hotel nearby – Whitley Hall Hotel is a graceful 16th century country house with exquisite cuisine in a tranquil wooded estate only 40 minutes from the centre of Leeds.

Designed to keep out the barbarians, Hadrian’s Wall provides an atmospheric 73-mile route from sea to sea, stretching between Wallsend in the east and Carlisle in the west. There are many highlights, though Birdoswall’s Roman Fort east of Carlisle is the best place to see the longest continuous stretch of the wall.

A Best Loved hotel nearby – Temple Sowerby House Hotel is a haven of timeless hospitality and fantastic food in the beautiful Eden Valley on the edge of the Lake District. The location is ideal for exploring the Yorkshire Dales, Eden Valley and Hadrian’s Wall (around an hour’s drive away).

Windermere, at 10 miles long and 220 feet deep, is England’s largest natural lake, indulge in everything from watersports to drifting by the picturesque shoreline villages.

A Best Loved hotel nearby – Holbeck Ghyll Hotel & Spa is small traditional 4-star country house hotel located between Ambleside & Windermere with stunning views of the lake (voted as one of the best in Europe by the Telegraph).

Once a thriving cotton mill, surrounded by a Victorian model village, Salts Mill is now home to arts spaces, bookstrores and a café. Opened in 1853, Salts Mills and the entire village of Saltaire are now a protected UNESCO World Heritage Site.

A Best Loved hotel nearby – The Devonshire Fell is a cosy and stylish boutique country hotel with memorable views of the Yorkshire Dales and delectable cuisine in the 2 AA Rosette restaurant. 22 miles from Saltaire.

Ride a gondola across in the Lake District. This 19th-century steam yacht, with its plush saloon, has been lovingly restored by the National Trust. Enjoy amazing views and combine a cruise with a visit to Ruskin’s Brantwood or a hike into the Coniston Fells.

A Best Loved hotel nearby – Rothay Manoy Hotel is a Lake District Regency gem with fine 2 AA Rosette-winning cuisine just on the edge of beautiful Ambleside. A 15 minute drive from Coniston village, at the head of Coniston Water.