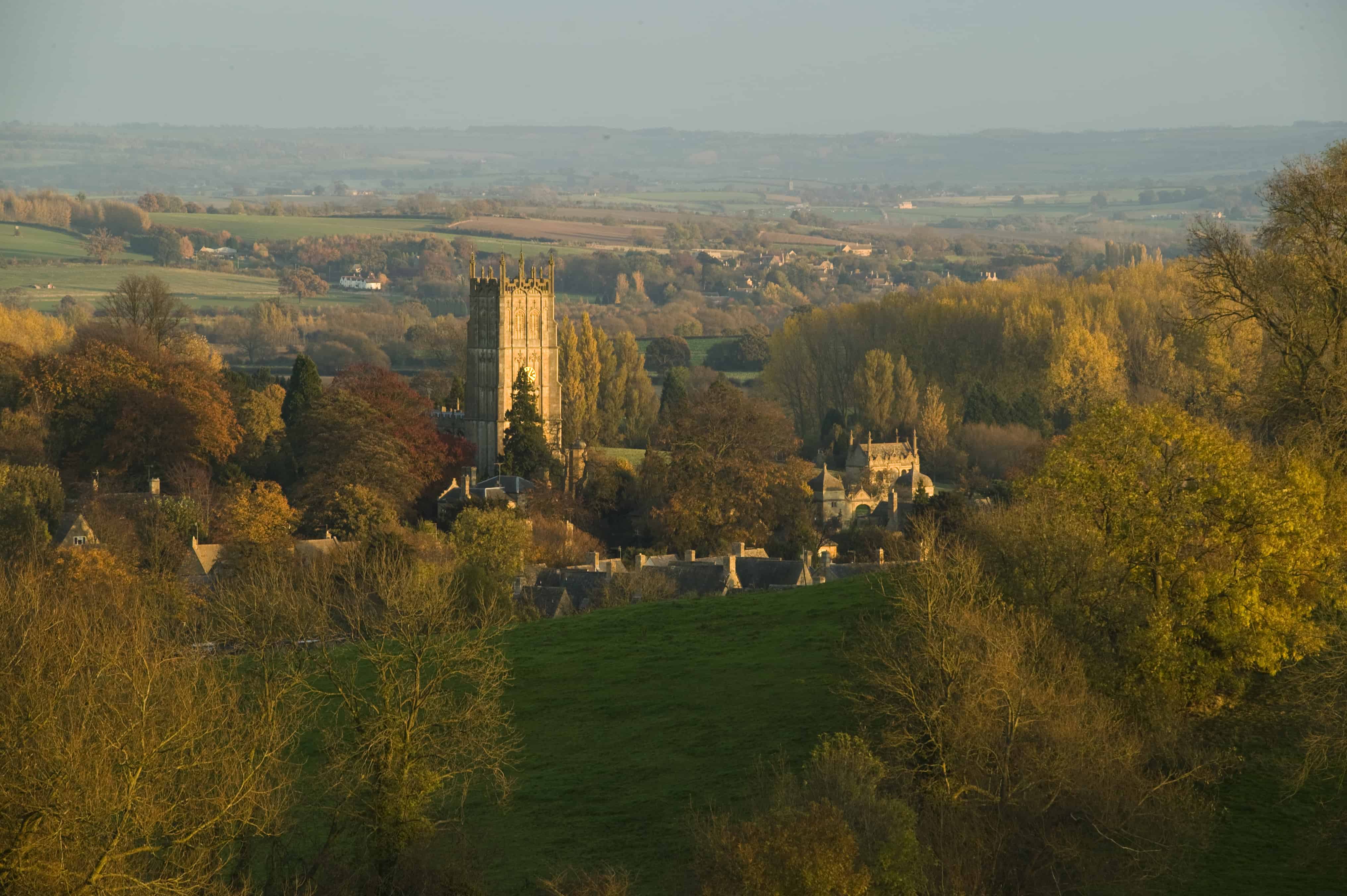 Best Loved Hotel’s Guide to the Heart of England

The Heart of England conjures up images of a landscape we think of as quintessentially English – picturesque villages, stately homes, country pubs, market towns and meandering lanes. Our guide to the Heart of England stretches from the Wye Valley and Welsh Marshes across the Midlands and Cotswolds, over to Leicester and Nottingham and up to Derbyshire and the Peak District – an inexhaustibly rich and fascinating area.

Blists Hill is a 50-acre open-air museum at Ironbridge Gorge in Shropshire, one of 10 museums exploring the area’s pivotal role in the Industrial Revolution. It’s a wonderfully devised celebration of the era and life in an iron-manufacturing town in about 1900. Alongside the remains of original blast furnaces on the site, built in the 1830s and in operation until 1912, Victorian streets have been created with rescued buildings. A post office, a grocer’s, a print workshop and a church are among the many properties painstakingly reconstructed here. This latter-day community is populated with actors in character role and also by staff in Victorian attire who demonstrate crafts such as woodturning and candle-making and talk you through how people actually lived.

A Best Loved hotel nearby – Only a shortly drive from Ironbridge, The Raven Hotel & Restaurant a former 17th century Shropshire coaching inn in the heart of picturesque Much Wenlock with excellent 2 AA Rosette-winning cuisine.

A gift of a grateful Queen Anne to John Churchill, the first Duke of Marlborough, Blenheim Palace, in Oxfordshire, is a brilliant, Baroque extravaganza built by John Vanbrugh and mostly completed before his departure from the job after a series of quarrels with the duchess Sarah. A heroic mode prevails, but inside and out, with Corinthian porticos, massive statuary, and Baroque wall and ceiling frescoes. At the end of the west corridor is the room where Winston Churchill was born in 1874. The gardens with a picturesque lake are by Capability Brown.

A Best Loved hotel nearby – The Feathers is located in Woodstock, just at the gates of Blenheim Palace – you can’t stay anywhere closer! This luxurious and stylish 4-star townhouse hotel also boasts excellent 2 AA Rosette cuisine and a Gin Bar with a record-breaking 400 varieties of gin.

On the site of a Tudor manor house (and temporary prison of Mary, Queen of Scots), the palatial estate of Chatsworth was reconstructed by the fourth Earl and first Duke of Devonshire in the late 17th century. This is one of England’s most Arcadian stately homes, to be enjoyed in any season. Following a massive restoration, the scaffolding is off to reveal the original gilded glory of this monumental building, set in one of the prettiest settings imaginable. Take a full day to appreciate the architecture, art collection, 100 acres of gardens, the Farm Shop, adventure playground and much more.

A Best Loved hotel nearby – When visiting Chatsworth, there’s nothing like actually staying on the Estate itself! That’s exactly what you do at Cavendish Hotel. Owned by the Duke and Duchess of Devonshire, this 4-star hotel features supremely comfortable bedrooms and exquisite food.

Take a walk in the beautiful hills of the Peak District. The Edale and Derwent Valleys are two of the most attractive areas of the Peaks and contain an unrivalled mixture of scenery. In Edale there are limestone crags and dales on one side and the shale hills of Mam Tor, Lose Hill and Win Hill on the other, not to mention extraordinary scenery below ground in a series of caverns around Castleton, including Blue John and Speedwell. The Derwent Valley in general is exquisite, with a classic panormaic view available from Curbar Edge, a short walk from the Curbar Gap car park.

A Best Loved hotel nearby – Losehill House Hotel & Spa is ideally located for exploring the Peak District, including the finest walking trails, Blue John Caverns and the “plague village” of Eyam.

The Maynard is set in the Derwent Valley and is perfectly situated for exploring Chatsworth and enjoying the view from Curbar Edge.

Watch a performance by the Royal Shakespeare Company in Stratford-upon-Avon, the Warwickshire town where the Bard was born. The the 1,018-seat Royal Shakespeare Theatre is the  main thrust stage auditorium, reopened in 2010 after a three year renovation. Another option is the 426 seat Swan Theatre, beloved by actors and audiences alike ffor its intimacy and adventurous programming, with a mixture of Restoration plays, works by Shakespeare’s contemporaries and modern works. Excellent guided tours of the various parts of the theatre are available, and the views of Stratford from the Tower are impressive.

A Best Loved hotel nearby – Billesley Manor is a 4-star country house situated just three miles from Stratford-upon-Avon, yet its tranquil location feels like a world away. Even the library here was once used by Shakespeare.

The Cotswold Way is perhaps the UK’s prettiest and most bucolic long-distance trail. This path whispers its way through 102 utterly gorgeous miles of Middle England, taking in hidden villages that doze happily while the 21st century passes them by, escarpments where you can bounce along flower-filled meadows, medieval commons grazed by free-roaming cattle, and canals where a kingfisher may whistle past as you munch your sandwiches.

For those without the time or inclination to walk the whole thing, the beauty of the Cotswold Way is that it lends itself to bite-sized chunks. Conveniently, two sections perfectly suited for such an approach bookend the trail. From the way’s northern terminus in Chipping Campden, a path winds uphill for five miles through woods to the plateau of Dover’s Hill and the folly of Broadway Tower. From here, it can feel as though much of western England is laid out in front of you, with vast plains sweeping timelessly towards a blurred horizon of hills and mountains amid the Welsh Borders. At this point you are presented with the most delightful of quandaries: to return to the tearooms of Chipping Campden or barrel down the hill into Broadway and its similarly appetising suite of eateries?

A Best Loved hotel nearby – The Broadway Hotel is a elightful historic, fully refurbished hotel situated in the lovely Cotswold village of Broadway, ‘Jewel of the Cotswolds.’

Browse the state-of-the-art visitor centre at World of Wedgwood at Barlaston. In the museum you can view the UNESCO protected collection of over 250 British ceramic production. Learn about Josiah Wedgwood’s lasting influence on industry and society the admire the skills of designers and artisans whose work has kept Wedgwood at the forefront of taste and fashion throughout its history. In addition, the factory tour gives in depth view of all aspects of quality ceramic production including casting, figure making, pattern decorating and hand painting, ornamentation and gilding.

A Best Loved hotel nearby – Soulton Hall in Shropshire is an impressive stately Elizabethan manor house situated on a 500-acre estate of working farmland. Owned by the same family for more than 400 years, this is the perfect place from which to explore the best of Shropshire and the Midlands.

The Black and White Villages, Herefordshire

Go on the trail of North Western Herefordshire’s black and white villages, a 40-mile self-guided tour of pretty market towns with eye-catching timbered houses, some medieval, some from more recent times. The circular trail leads west from the ancient town of Leominster, through a rich landscape of orchards, hopyards and distant hills, taking in the most picturesque black and white villages along the way as well as the little market town of Kington.

A Best Loved hotel nearby – Castle House is an elegant boutique Georgian townhouse in the centre of Hereford which somehow magically retains the feeling of a country house. Claire Nicholls’ seasonally-changing menu is the best dining experience in Hereford.

Located two miles north of the city centre, the National Space Centre in Leicester invites you to interactive journey through the universe, including a 3D simulated rocket launch. The themed galleries explore the gamut of all these astronomic, from planets to orbiting Earth. An emphasis is placed on interactive exhibits, making this a great attraction for children as well as adults.

A Best Loved hotel nearby – The Belmont Hotel is a stylish boutique retreat on the historic and leafy New Walk, and just a short stroll from Leicester city centre. Excellent AA Rosette-winning restaurant and bar.

Stepping through an open doorway on the first floor of an old silk mill in Chipping Campden, and you are transported to a 1902 silversmiths’ workshop. The beams are darkened with soot and almost every inch of wall space is fabulously cluttered with hammers, mallets, anvils and more. Two men are pummelling and shaping pieces of silver at wonderfully worn work benches, a third stands at the forge where he fires a gas torch at a delicate-looking bowl-in-the-making.

These silversmiths continue the extraordinary legacy of the Arts and Crafts movement into the 21st century. What might appear as just a pleasant place to pick up an unusual souvenir to visitors drawn to the Cotswolds’ quintessential rural idyll, is, in fact, continuing a little-known artisan tradition at the heart of the English countryside. Nearby Court Barn, once a threshing centre and now home to an Arts and Crafts museum, is another place which brings to life the talented designers and craftspeople who have worked in Chipping Campden and the north Cotswolds for more than 100 years.

A Best Loved hotel nearby – Cotswold House Hotel & Spa is a luxurious hotel & spa in the charming village of Chipping Campden, right in the heart of the Cotswolds.

Wherever in The Heart of England your travels take you, there’s a fantastic Best Loved hotel waiting for you: Click here for a full list of  Best Loved hotels in the region.